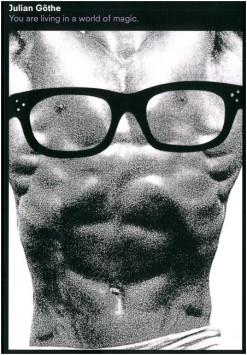 Influenced by the decorative arts and furniture design, Göthe’s work moves ambivalently between elegance and danger in the assumption that every object has a soul.

The objects, drawings and collages of Julian Göthe combine minimalist strictness with drama and glamour. His works reveal an intense involvement with both epochal and marginal phases of art and cultural history, with high and popular culture, primarily from the first half of the 20th century: design ideas from the art déco of the 1920s and 1930s meet the aesthetics of early Hollywood film sets.

References to the corporeal Stilnovo furniture design from 1950s Italy, which was influenced by surrealism, are interwoven with allusions to the impersonal, industrial, schematic minimal art of the 1960s. An interest in the applied neoclassical and modernist forms often stigmatized as vulgar or pretentious is a leitmotif of Göthe’s work.

Julian Göthe’s works can be found in the collection of the Pinakothek der Moderne, the Goetz Collection and the Kunstsammlung NRW.

£23.00
Buy now
(Your order will be fulfilled by Ingram Publisher Services)