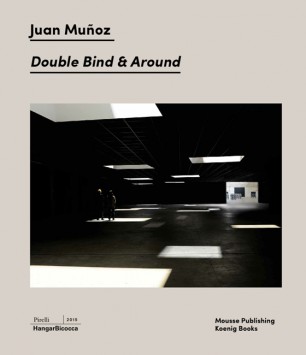 Mainly known for his sculptures in papier maché, resin and bronze, Juan Muñoz often took an interest in writing and in sound art, creating audio pieces and compositions for the radio.

The art of Juan Muñoz (1953–2001) reintroduces human figure at the center of architectonical and sculptural space.

Puppets, acrobats, ventriloquists, dwarfs and ballerinas are but some of the characters that inhabit his works, alongside anonymous orient-looking figures, whose presence recalls ambiguous and contradictive scenarios.

Muñoz’s major installation piece, Double Bind was originally the second commission in The Unilever Series, created for the Turbine Hall at Tate Modern in 2001.

Published on the occasion of the exhibition Juan Muñoz: Double Bind & Around at HangarBicocca, Milan, 9 April – 30 August 2015.