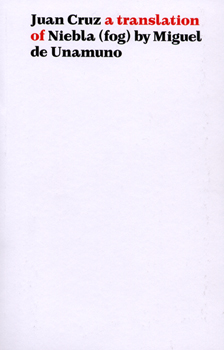 Niebla (fog) recounts the story of Augusto – a man who spends his life in a fog of philosophical confusion. Seemingly a meditation on love, the novel is composed of a series of tricks and deceits played on Augusto by the other characters, on the characters by the author, and by the author on his reader.

Cruz draws on the act of translating specific texts to explore the mechanisms of displacement, the construction of identity and to interrogate the creative process. With Niebla (fog), Cruz re-presents Unamuno’s meditation on the blurred relationship between autonomy and dependence.