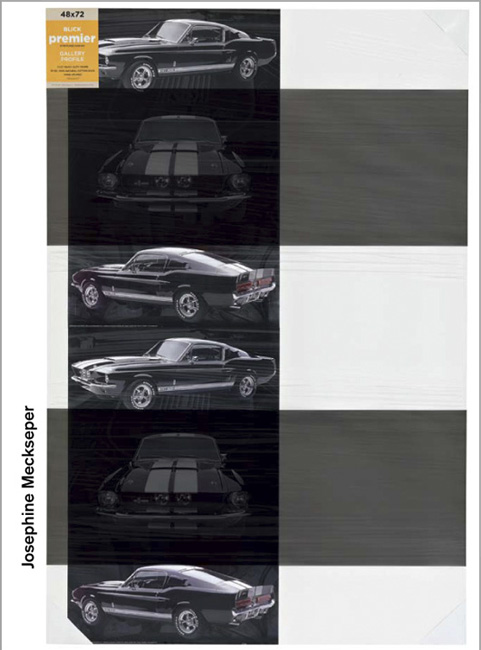 In her photography, videos, and installations Josephine Meckseper engages with the interaction between politics and glamour. Thus, in her works, images of political activism—whether photographs of demonstrations or newspaper cuttings—are set against sparkling consumer goods and advertising motifs, evoking a paradoxical effect.

On the one hand, the pop-political vocabulary of forms appears absurd in its opposing ideological effect; on the other, the artist discloses references by interpolating them seamlessly in a decorative and apparently elegant display.

Meckseper has pursued the capitalist-critique approach of recent years, with subject areas agitating around the war in Iraq and the oil industry, with all their inherent economic and socio-political implications, in particular those concerning the automobile industry.

This book concentrates on a new series of works developed from this context. Hence in the installation Ten High (2007) numerous silver shop display dummies converge on a mirror smooth platform holding in their hands objects such as signs, bearing anti-war slogans like No War in Iran or the notorious recession signal Going Out of Business/Sale.

Published with the Migros museum für gegenwartskunst, Zurich; Blaffer Gallery, the Art Museum of the University of Houston; and Ausstellungshalle zeitgenössische Kunst Münster