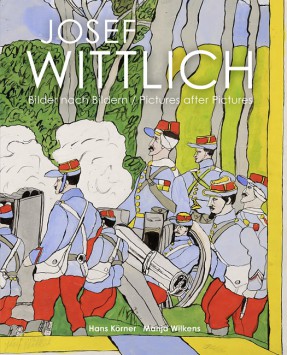 For the first time ever, this biography and catalogue raisonné with more than 1,200 illustrations tell the unique story of the industrial labourer and artist Josef Wittlich (1903–1982) from the German Westerwald.

Although he never visited an exhibition, he invented his own unique form of Pop Art – long before Andy Warhol, Roy Lichtenstein and Mel Ramos – with motifs reaching back as far as the First World War.

Josef Wittlich was only discovered late in his ‘career’ when, by chance, an artist visiting the ceramics factory where he was employed noticed his paintings, which Wittlich’s fellow workers had hung on the walls.

He adapted images from war chronicles as well as from everyday culture, which he found in numerous newspapers, magazines and mailorder catalogues. From these source images, he created works of art in his own independent style and featuring a high recognition value.

£75.00
Buy now
(Your order will be fulfilled by Ingram Publisher Services)