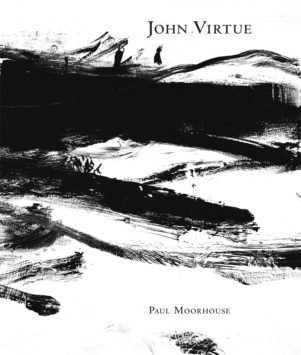 In 1978 John Virtue had been living in Green Hawarth, a remote Lancashire village, for seven years. During that time he had struggled to find a way forward as an artist and had become discouraged by a growing sense of failure. Finally, he decided to destroy all his previous work created.

That destruction was to prove a liberation. On 10 April this same year, he resolved: ‘Now is the time to become a real artist.’ It was a memorable turning point. He decided that the surrounding landscape would form his subject and that in his response to it there would be no doubt, no equivocation.

Eliminating brushes, colour, paint and canvas – all of which seemed extraneous to the direct means of expression he was seeking – he began again by making small pencil or charcoal drawings during regular walks. These images, he determined, would unfold like a visual diary. With this pledge, Virtue decided the course of his art. It commenced a journey that continues to the present day.

During the ensuing four decades, Virtue has forged a distinctive artistic path. Drawings made in the landscape have continued to be the primary source for larger works created in the studio. There, the images preserving his original experiences yield a second phase of imaginative and expressive engagement that goes far beyond each observed motif.

Combining walking, drawing, abstraction and radical improvisation, Virtue’s dynamic process has produced a body of work that extends the tradition of landscape painting in unprecedented ways. Today, Virtue is widely regarded as one of Britain’s leading painters.

Paul Moorhouse has been closely associated with the artist for over twenty years and has written extensively on his work. In this lavishly illustrated book, he discusses the development of Virtue’s art from its beginnings and traces the artist’s close relationship with locations in Devon, Exeter, London, Italy and Norfolk.

As Moorhouse shows, these places have each generated a fresh artistic response, forming distinct episodes in an overarching vision. This is rooted in the landscapes that Virtue observes but also in deeper aspects of experience. For in Virtue’s art the passage of time, mortality and a will to express the intensity of each lived moment are abiding themes.