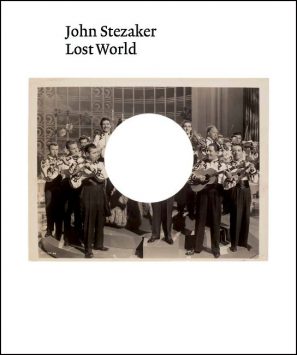 British Conceptual artist John Stezaker (b. 1949) is known for his distinctive, often deceptively simple, collages. He has been making art since the 1970s, but achieved prominence relatively recently.

In 2011, he had a retrospective at the Whitechapel Gallery, London, and, in 2012, he won the Deutsche Börse Photography Foundation Prize, even though he does not take photographs.

Stezaker says collage is about ‘stuff that has lost its immediate relationship with the world’ and involves ‘a yearning for a lost world’. A collector, he works from an archive of out-of-date images—mostly old film stills, vintage actor head shots, and antique postcards. These images come in standard sizes and are highly conventionalised—all variations on themes.

In addition to collages, Lost World includes poignant found-object-sculptures: a selection of antique mannequin hands, offering a repertoire of gestures. There’s also a film, Crowd, presenting hundreds of film stills of crowd scenes, each for one frame only, in a bewildering blur.