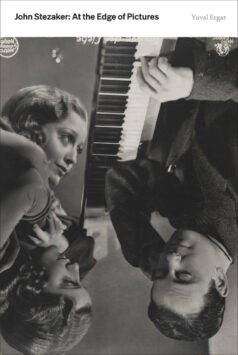 John Stezaker (b.1949. Worcester, England) is one of the most distinguished voices in the history of image-based collage.

Since the 1970s his work has occupied a unique position in the face of radical changes in the economy of popular visual culture and its implications on the value of ‘found’ imagery in art.

Faced with the post-conceptual crisis of the mid-1970s, Stezaker came to reject the prevailing tendency among his British contemporaries towards agitprop photomontage, promoted in the name of punk, anarchism and second-wave feminism.

He also positioned himself at a distance from the North American Pictures Generation artists with whom he had a meaningful exchange during this period, and in whose narrative he remains something of a missing link to this day.

Stezaker was gradually to become consumed by a different enquiry altogether – one that was, and remains, invested in the possibility of reviving the mechanically reproduced image and exploring its potentials as an outmoded visual currency that is shifting out of circulation in favour of new technologies and alternative modes of image distribution.

Featuring loans from various public and private collections including the Tate collection (London), and the Rubell Museum collection (Florida), At the Edge of Pictures offers visitors a rare opportunity to explore the artist’s pivotal role in the history of collage and image appropriation from the 1970s to the present day.