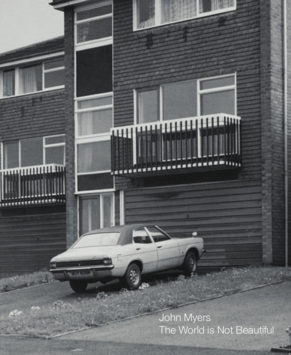 “I believe photographers have got to come to terms with the world we live in, not the world journalists like, which is spectacular and exciting and makes good copy.” – John Myers

John Myers’ portrait and landscape photography was produced throughout the 1970s in and around the West Midlands and went largely unnoticed until a signature exhibition at the Ikon Gallery, Birmingham in 2011. This new publication presents the artist’s photographic response to 1970s conceptualism, and situates his work in the wider international context.

Myers’ landscape work compares favourably to the new understandings of ‘man altered landscape’ photography which were developed by the luminaries of the New Topographics movement (including Stephen Shore, Lewis Baltz and Bend and Hilla Becher) in the USA and in Europe from in the mid 1970s.

It is becoming increasingly clear that this body of work was many years ahead of his time, asking visionary questions about what photography and landscape were ‘for’ in a uniquely austere series of black and white prints.