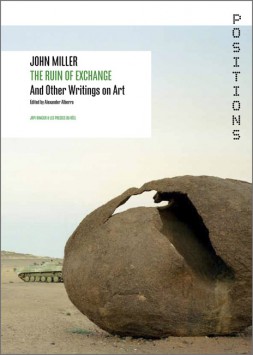 The texts in this collection of John Miller’s writing and criticism span a 20-year period, 1989 to 2009, and are divided into four sections: monographs, cultural essays, theory, and artist’s statements. Many appear in English for the first time.

Throughout, Miller aims to question artistic and curatorial theories and practices from the singular position of an artist-writer. This makes the production/reception issue an inherent dialectic in his work.

Miller sees criticism as part of a comprehensive practice that includes teaching and, of course, art production. His approach differs from that of the academic or the journalist in that he implicates his own practice in the object of his critique.

Moreover, rather than evaluating that object, Miller tries to articulate how it operates within a given political economy. He maintains that sociopolitical forces and ideological apparatuses underpin the production of all cultural ‘artifacts’.

This book is part of the Positions series, co-published with Les presses du réel and dedicated to artists’ writings.