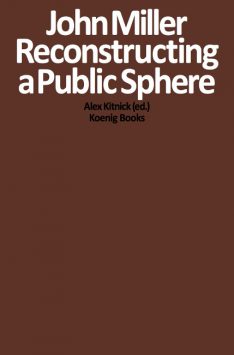 John Miller’s PowerPoint presentation, Reconstructing a Public Sphere, focuses on a specific location, Battery Park City and the adjacent World Trade Center in New York. It is both a photographic essay and critical text — and despite its title, Miller’s most autobiographical work to date.

Microsoft’s PowerPoint, the heir apparent to the 35-mm slide projector, sadly now “the staple of comedy skits,” is subverted by Miller’s narrative of personal memory and experience: he ponders the park’s civic history and public art projects, as well as his evacuation from the area in the wake of 9/11.

Upon returning to the park fifteen years later, Miller questions how public space develops from reconstruction—and the function of the public within it. Akin to the effects of photography, he considers how public space redacts local history as much as it conjures subjective memory.