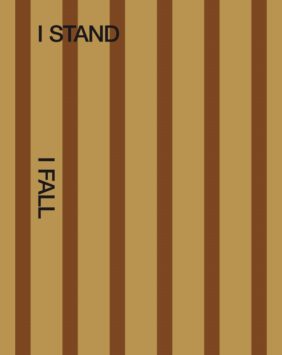 The publication I Stand, I Fall, a comprehensive survey of work by John Miller, coincides with the first American museum exhibition dedicated to the influential conceptual artist.

Through almost 150 images, this catalogue comprehensively traces Miller’s use of the figure throughout his career in order to incisively comment on the status of art and life in American culture.

The book features a range of media, including painting, sculpture, drawing, photography, installation and video; never-before-seen works from the 1980s; new large-scale sculptures; and the artistʼs most ambitious architectural installation to date – a vast and immersive mirrored labyrinth that went on view at the ICA Miami’s Atrium Gallery.

I Stand, I Fall, surveys Miller’s use of the figure in order to examine themes of citizenship and politics, and the conventions of realism in contemporary art.

Organized chronologically, the exhibition begins with his drawings and paintings from 1982-1983, the majority of which have never been presented publicly.

Influenced by the pastoral genre of painting and American social realism of the 1920s and 30s, these deadpan, even grotesque, works explore issues of urban and suburban Americana, public space, and the human.

Published retrospectively after the exhibition John Miller: I Stand, I Fall at Institute of Contemporary Art, Miami, 18 February – 12 June 2016.