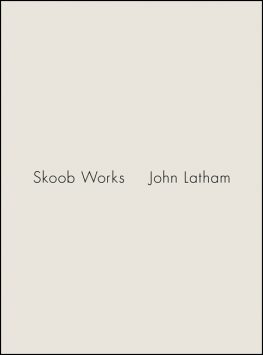 John Latham (1921–2006) was a pioneer of British conceptual art, who, through painting, sculpture, performances, assemblages, films, installation and extensive writings, fuelled controversy and continues to inspire.

Latham began using books as a medium in 1958, extending his earliest spray-painted canvases into the third dimension by creating reliefs wherein the publication emerged from plaster on canvas.

Titled ‘skoob’, a reversal of ‘books’, these works invert the traditional function of literature, typically read in a linear and temporal manner, to create an object that can be consumed spontaneously and without structure.

The exhibition at Lisson Gallery features a selection of the artist’s early book reliefs from the 1960s, which consist of books and a variety of other materials including scrap metal, wires, gauze and nails, attached to a flat rectangular surface with plaster.

Also presented are Latham’s subsequent Skoob works from the 70s and 80s, including his seminal sculptural piece, They’re Learning Fast (1988): a fish tank containing a number of piranhas and waterproofed inserts with extracts from Latham’s philosophical treatise, Report of a Surveyor.

Featuring contributions from curator Pavel Pys and Turner Prize-winning artist, Laure Prouvost this publication is a useful introduction to the practice of this innovative artist who used books throughout his career.

Published on the occasion of the exhibition, John Latham: Skoob Books at Lisson Gallery, New York (2 May – 16 June 2018).