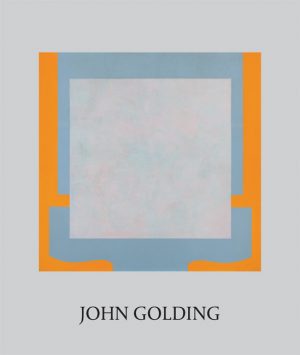 Perhaps best known for his seminal book, Cubism: A history and an Analysis 1907-1914 (1959) he actually considered himself primarily a painter and exhibited extensively both in the UK and internationally during a career that spanned almost six decades. In retrospect, his reputation as a notable art historian somewhat overshadowed his own practice as an artist. So, this new monograph endeavours to reveal and celebrate the other side of his oeuvre.

‘Golding’s knowledge of Renaissance painting, especially the great Venetians […] informed his own work as he moved out of figuration and into abstract canvases in which light was the subject. He painted vertical streaks of colour down his canvases like pleated light (as he put it) and occasionally on, say, a misty blue, he would scatter clusters of gold pigment to reflect the actual light. After the end of the 20th century, he started to structure his paintings so that they appeared to be based on photographs from thousands of feet above the Earth, with ‘roads’ and ‘bridges’ and ‘canals’…‘ – Michael McNay, 2012 (The Guardian)