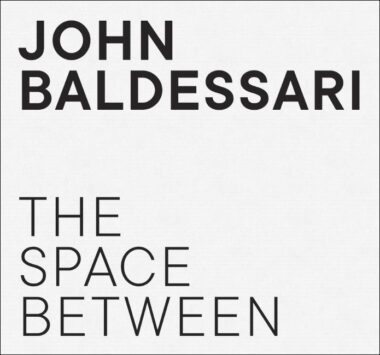 “When you’re looking at two things, don’t look at them, look between them […] The space between two things, that’s very important.” – John Baldessari

The Space Between celebrates John Baldessari’s final painting series – 30 paintings on canvas that explore the gaps in meaning between word and image, foreground and background, photography and painting, presence and absence.

Quintessentially Baldessarian in their witty, sometimes absurd pairings of objects and text, they feature imagery from film stills and found photographs, partially covered by gestural fields of white and black paint that direct our attention to particular elements in each scene while obscuring others.

Certain themes reveal themselves across the series, including body parts, gestures, and tools. Simultaneously banal, surprising and poignant, Baldessari’s last series beautifully encapsulates the thrust of his artistic project as a whole: To explore the amorphous spaces between things, people and ideas.

This book features essays by Russell Ferguson, curator, author and professor in the Department of Art at University of California, Los Angeles; Hans Ulrich Obrist (curator, critic and artistic director at Serpentine Galleries, London; and artists Barbara Bloom and David Salle, along with a portrait by artist Catherine Opie.

Published after the exhibition, John Baldessari: The Space Between at Sprüth Magers, Los Angeles (12 June – 11 September 2021).