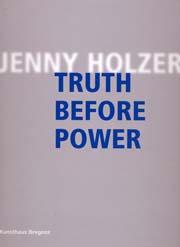 Published in conjunction with the exhibition of the same name at Kunsthaus Bregenz, 12 June to 9 September 2004, Truth Before Power by the American artist Jenny Holzer explores the United States government’s complex political and commercial relations with the Middle East from the end of the Second World War to the present, the United States’ current ‘war’ on terrorism, the consequences of 9/11 and ensuing debate, the theory and practice of intelligence and counter-intelligence, and the problem of achieving a just and workable balance between secrecy and transparency.

Almost all the texts used by Holzer are US government documents – primarily official communications, reports, and letters made available to the public under the landmark legislation, the Freedom of Information Act. Many texts were originally ‘classified’ or confidential at the time they were written, and remain heavily redacted.