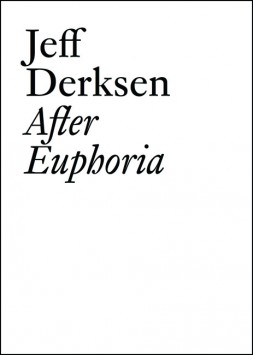 After Euphoria is a collection of  Jeff Derksen’s writings on art, architecture, and globalism. The selected essays in this book focus on artistic practices and modes of cultural criticism that aim their questions, research, and propositions at neoliberalism’s alliance of the economy, affect, and the present.

Jeff Dersken is a writer, poet, and critic based in Vancouver and Vienna. His on-going research investigates the effect of globalisation on the production and experience of culture.

Derksen’s critical writing has appeared in Springerin, Archis, Open Letter, Camera Austria, C Magazine, and Hunch. He is the editor of the literary journal West Coast Line and is a founding member of Vancouver’s writer-run centre, The Kootenay School of Writing.

This book is part of the Documents series, dedicated to critical writings and co-published with Les presses du réel and Emily Carr University Press.