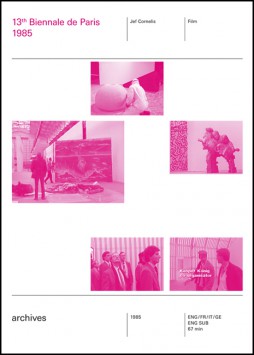 Held at the Grande Halle de la Villette, the 1985 Biennale de Paris is among the most important exhibitions of the 1980s. Organised by an international team of curators and art critics the Biennial was a platform for both established and up-and-coming artists active in the mid-1980s.

Mainly realised during the mounting of the exhibition and its opening, the film documents the conversations held during the preparatory phases of the event about the revival of figurative art, the role of museums and television, and the individual nature of artistic experience.

Jef Cornelis mainly worked for the VRT, the Belgian national television in Flemish. He realised more than 200 films, especially on architecture, literature, and the arts.

Yves Aupetitallot’s illustrated essay in the booklet offers essential reference points that elucidate the context and debates of this pivotal exhibition.