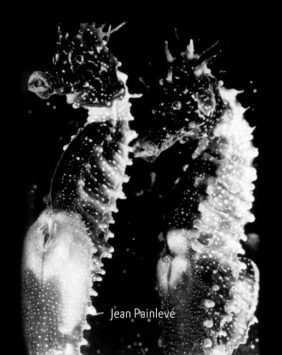 Widely celebrated for his films on marine life, French photographer and filmmaker Jean Painlevé (1902–1989) is a unique figure in the twentieth century arts. This publication accompanies the first UK solo exhibition of his work.

Painlevé’s moving imagery of marine life, in particular, commanded the respect of many renowned avant-garde artists working in 1920s Paris (Luis Buñuel, Sergei Eisenstein, Man Ray and Alexander Calder), at the beginning of a life-long career that almost spanned the twentieth century.

The exhibition (and this book) presents a number of seminal films alongside a selection of photographs and jewellery, exemplifying Painlevé’s passion for making science accessible.

The selection of works reflect Painlevé’s constant explorations of new ways to engage with the audience, from his early portraits and close-ups of marine animals, his iconic film The Seahorse to later works such as the 1978 Phase Transition in Liquid Crystals.

L’Hippocampe (The Seahorse), was Painlevé’s first and only film using underwater footage shot with a rudimentary waterproof case for his camera. Later this sea creature was used as a stylised motif for a fashion brand offering a range of bracelets, necklaces, printed fabrics and silk scarves associated with the film.

Published on the occasion of the exhibition Jean Painlevé at Ikon Gallery, Birmingham, 15 March – 4 June 2017.