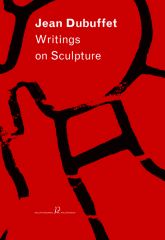 The painter and sculptor Jean Dubuffet is considered one the major representatives of French postwar art. From 1962 on, after initial experiments with various painting and print techniques, he developed the series of drawings that he entitled with the fantasy name of L’Hourloupe, cell-like structures restricted to the colours red, white, blue and black which Dubuffet – as he himself said – ‘allowed to follow their impulses freely.’

From 1966 he carried the L’Hourloupe theme over into sculptures made from polystyrene, partly in large-scale, painted, freestanding sculptures and architectural, surreal though functional constructs. For the artist, these works were a parallel world to the real world, a fabrication of one’s own fantasy or a cognitive interpretation of forms not programmed by nature. His effort to initiate anti-intellectual art is also shown in his engagement for the art of the mentally ill, art brut, which he collected and fostered.

The sculptures from Dubuffet’s late work shown in this book are models for monumental walk-in architectural pieces. The text extracts from his biographical writings describe the mental path he took in developing his maquettes.