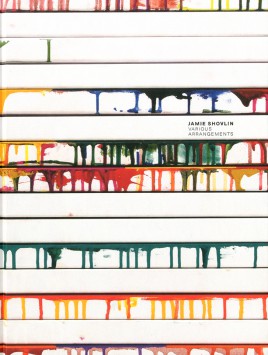 The exhinition Various Arrangements (Haunch of Venison, London, 18 April – 26 May 2012) extended Jamie Shovlin’s interest in exploring the fallibility of classification systems, exploring an absurdist premise: that intellectual achievement can be ranked or scored according to a points system.

The exhibition was based around the cover designs of the Fontana Modern Masters series, a set of pocket guides published between 1970–95 on eminent writers, scientists and philosophers such as Proust, Freud and Sartre.

This catalogue includes full colour images of the works and photographs of the works in Jamie’s studio, and is accompanied by a text of the artist in conversation with Martin Holman.