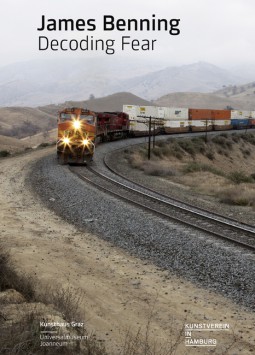 The American artist and filmmaker James Benning focuses on the ambivalence that exists between technical progress and the promise of liberty in a culture still bound to its pioneering spirit.

His work resonates with a critique of the information society and also an examination of recent US history: specifically of philosopher Henry David Thoreau and mathematician Theodor Kaczynski. Between 1976 and 1998 the latter became known as the ‘Unabomber’.

All in all this publication shows the importance of this Benning’s themes, his work so seemingly timeless, for our life today, shaped as it is by technical possibilities both positive and negative.

Published on the occasion of the exhibition James Benning: Decoding Fear at Kunsthaus Graz, 7 March – 1 June 2014.