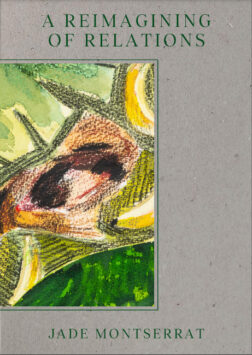 Jade Montserrat’s (b. 1981, London) publication, A Reimagining of Relations, is part of her Future Collect commission with Iniva and Manchester Art Gallery. This visually rich artist publication makes material the dialogue and ideas that have shaped Montserrat’s process over the past two years.

Centring on the conversations that have taken place between the artist and fellow creatives through the public programme associated with the commission, the publication also reveals her research and thinking around African American actor Ira Aldridge.

A key point of departure for Montserrat was the first work acquired by Manchester Art Gallery, James Northcote’s portrait of Ira Aldridge posing in character as Othello. A Reimagining of Relations asks us to consider the story behind the man in the painting alongside questions of institutional care for people, objects and performances.

It also includes conversations between Montserrat and curator-in-training Nikita Gill and between curator Kate Jesson and former Director of the National Portrait Gallery Sandy Nairne, alongside a commissioned essay by Alan Rice on the relationship between Montserrat’s work, Ira Aldridge and the history of Black communities in the North of England.

Documentation of Montserrat’s new works on paper as well as her performances weave their way through the publication, and a specially designed poster of Monsterrat’s score for her new performance, Rehearsal Methods: audition pieces for solo and collective (2021) is included as an insert alongside three unique bookmarks that make up the bibliography for the project.

Published on the occasion of the exhibition, ‘Constellations: Care & Resistance’ at Manchester Art Gallery (5 November 2020 – 5 June 2022).

£10.00
Coming soon
(subscribe to our newsletter be the first to know when this title is available)