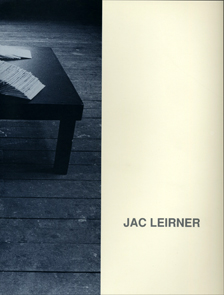 Jac Leirner’s multifaceted work is formulated through a process of collecting and ordering; tapping into what the artist has described as the ‘infinity of materials’. Since the mid-1980s, Leirner has amassed the ephemeral and incidental products of consumer culture, and reappropriated them into visually compelling sculptures and installations that demand to be both seen and read. Through their seriality and bold accents of colour, her work references both the history of Brazilian Constructivisim as well as the legacy of Arte Povera and Minimalism.

Jac Leirner was born in São Paulo, 1961, where she lives and works. In 1983 and 1989, Leirner participated in the Bienal de São Paulo and in the Aperto at the 44th Venice Biennale (1990). In 1991, she had a residency and exhibition at Walker Art Center, Minneapolis and Museum of Modern Art, Oxford. She participated in dOCUMENTA (IX), Kassel (1992) and represented Brazil at the 47th Venice Biennale (1997).