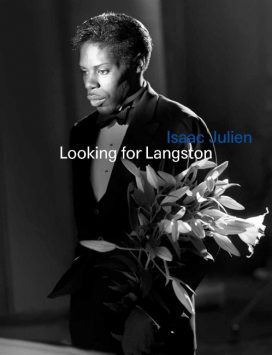 **This is a specially priced limited edition signed by the artist**

This limited edition signed artist’s book, focuses on Isaac Julien and his seminal work Looking for Langston (1989/2017), a lyrical exploration – and recreation – of the private world of poet, social activist, novelist, playwright, and columnist Langston Hughes (1902 – 1967) and his fellow black artists and writers who formed the Harlem Renaissance during the 1920s.

Directed by Julien and assisted by the film critic and curator Mark Nash, the 1989 film is a landmark in the exploration of artistic expression, the nature of desire and the reciprocity of the gaze, and would become the hallmark of what B. Ruby Rich named New Queer Cinema.

The newly-conceived photographic works featured in the publication revisit and expand upon aspects of the film and its multi-layered narratives of memory and desire, expression and repression. While some works focus on scenes from the completed film, the images also document the film’s making: its staging, lighting, iconography and choreography.

This lavishly illustrated publication includes texts by Isaac Julien and Pulitzer Prize winning critic Hilton Als, alongside rare archival material including storyboards by artist John Hewitt, colour polaroids taken during the making of the film and additional material relating to its original presentation and critical reception.

Published on the occasion of the exhibition Isaac Julien: “I dream a world” Looking for Langston, 18 May – 29 Jul 2017, Victoria Miro, London.

Trade customers can order copies direct from NBN International (orders@nbninternational.com) and quote the special ISBN DUM0000002087 (this book has the ISBN 9780993442087. The above special ISBN is for office use only).

£75.00
Buy now
(Your order will be fulfilled by Ingram Publisher Services)