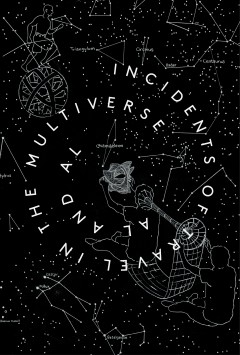 ‘Multiverse’ – noun: A hypothetical space or realm consisting of a number of universes, of which our own universe is only one. Incidents of Travel in the Multiverse focuses on three ‘multiverse journeys’ conceived by the acclaimed British artists and filmmakers AL and AL alongside some of the world’s groundbreaking scientists.

The first journey, Icarus at the Edge of Time, travels to the edge of a black hole, with superstring physicist Brian Greene and composer Philip Glass bringing Einstein’s theory of general relativity to life with visceral results. The second journey, The Creator, sees thinking machines from the future travel back in time in search of their creator Alan Turing, father of the computer age, who sowed the seeds for artificial intelligence. The third journey, The Demiurge, made in collaboration with the nanobiophysicist Bart Hoogenboom, creator of the world’s first ‘real’ images of DNA, travels across the universe on a mission to find the origins of life, and a cure for death.

Incidents of Travel in the Multiverse investigates a new era of scientific exploration, both real and imagined, navigated and interpreted by the artists. This book brings the creative process of AL and AL’s filmmaking to life by presenting a collection of previously unseen material from their archives, including photographs, maps, props, set designs, drawings, correspondence, screenplays and notes.