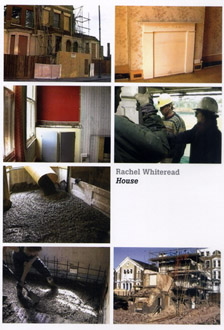 Now available on DVD, House charts the transformation of an ordinary home to one of the most ambitious and contentious artworks of recent years.

Cast in concrete, House stood in an expansion of empty parkland in East London for three months before being destroyed on the orders of the local council.

Its private conception and very public destruction were recorded by local film-makers John Kelly and Helen Silverlock over a period of several months.

The DVD is interspersed with occasional observations from Whiteread’s own video diaries as the sculpture’s notoriety grew.

Rachel Whiteread’s House records the short life of the sculpture at the quiet centre of one of the noisiest cultural storms of recent years.