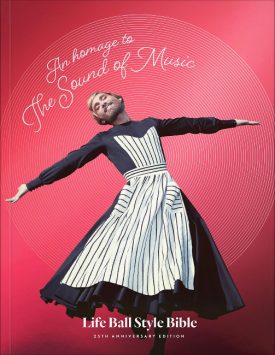 Since its premiere in 1993, the Life Ball has been committed to eliminating the taboos of HIV and AIDS in our society by supporting organizations and projects around the world.

The Life Ball is an exuberant festivity on Vienna’s Rathausplatz with extraordinary performances and international stars. Year after year it celebrates life and makes a loud statement in the fight against HIV and AIDS – resounding far beyond the boundaries of Austria.

In 2018, the Life Ball celebrates its 25th anniversary. With an homage to The Sound of Music, it commemorates the most successful musical film released in the last century. The new Style Bible shows an elaborate spread of photos that reinterpret iconic scenes from the 1956 movie by reimagining polarizing themes such as religion, tradition, and tolerance in a new, artistic context.

For the first time this year, the photographs were taken at original locations of the eponymous Hollywood film. They are intimate, humorous, lavishly opulent and touching. Together with backstage photos of the shoot, they provide a joyful insight into the look and feel of this year’s ball. hotography by Markus Morianz, Alfred Morina and Werner Streitfelder. Design by Michael Balgavy.

Published on the occasion of the Life Ball, The Sound of Music, 2 June 2018, Vienna.