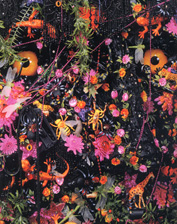 Hew Locke has become well known for his sculptures which are largely made from everyday materials such as cardboard and toys, cake decorations, glitter, sequins, plastic flowers, etc., largely purchased from pound shops or market stalls. His sculptural works range from large scale architectural constructions such as Cardboard Palace and Hemmed In to vibrantly coloured portraits of the Royal Family.

His inspiration is drawn from a wide range of sources including baroque, rococo, Hindu, Islamic and colonial architecture along with fairground and carnival art and cumfa, the local form of voodoo in British Guyana where he grew up.

This publication was produced to complement a major solo exhibition at The New Art Gallery from 29 April – 26 June 2005.