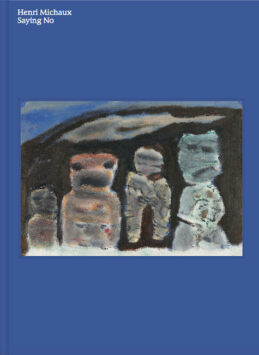 Michaux’s work was gladly viewed, hailed and discussed in a good number of publications beginning in the 1950s.

The artist’s work has lost none of its relevance. On the contrary, it is important today more than ever to take a close look at his output and artistic practice.

Michaux was a Grenzgänger, one who lived and worked on the borders, the frontiers, the limits; he was resistant, reluctant, an individualist, a man who added to complexities and refused comfortable complacency. Qualities that need to be made a part of life now more than ever. Michaux is not an artist to whom we can attribute a late output.

Linear production and groups of works were foreign categories to him, and so it is especially interesting to see in the present catalogue how freely the works both stand together and face off against each other. It is an endless reference to the themes, ideas, and approaches in his visual work – which runs from 1937 to 1984.