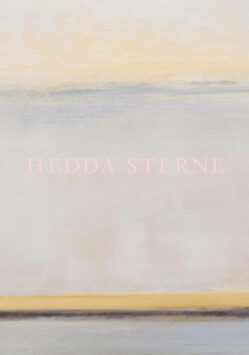 An active member of the New York School, Hedda Sterne, who was born in Bucharest, Romania in 1910 and fled to the US in 1941, created an extensive body of work that intersected with some of the most important movements and figures of the twentieth century.

A bridge between European Modernism, in particular Surrealism, and American Abstract Expressionism, Sterne’s work stands as a testament to her independence of thought, moving freely between figuration and abstraction throughout her career.

Her work has enjoyed increased critical visibility in recent years, featuring in major exhibitions in New York such as ‘Making Space: Women Artists and Postwar Abstraction’, held at MoMA (2017), and the ongoing display ‘Epic Abstraction’ at The Met Fifth Avenue.

This publication features an essay by Barbican Art Gallery curator, Eleanor Nairne examining the themes and motifs of Sterne’s work and the context in which it was made, and is richly illustrated with reproductions of the exhibition’s paintings and works on paper.