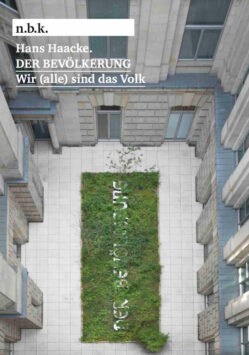 In 2000, Hans Haacke realized the site-specific, participatory work DER BEVÖLKERUNG (To the Population) in the Reichstag building, Berlin (a historic building that houses the Bundestag)

Members of the German Bundestag (German Federal Parliament) have since been invited to bring soil from their constituency to the Reichstag.

Haacke’s project triggered heated discussions, which finally led to a debate in the Bundestag on April 5, 2000. A narrow majority of the parliamentarians voted against the opponents’ motion to reject the artwork.

On occasion of the 20th anniversary of DER BEVÖLKERUNG, documents and archival materials on the genesis and reception of Hans Haacke’s art project have been displayed at Neuer Berliner Kunstverein; who also initiated the presentation of Hans Haacke’s project ‘Wir (alle) sind das Volk / We (all) are the people (2003/2017)’ on the facades of numerous partner institutions in Berlin for Berlin Art Week 2020.

This book documents both projects and features texts by Hans Haacke and interviews with the artist, as well as the complete historical Bundestag debate and recent statements by participating politicians.

£19.00
Coming soon
(subscribe to our newsletter be the first to know when this title is available)