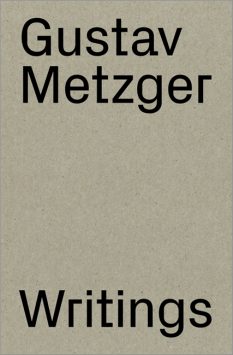 At last, published two years after his death, the writings of this increasingly important artist and activator. This is a huge anthology of over 350 texts by the founder of auto-destructive art, who become a powerful voice in anti-nuclear protest and environmentalism. A great man who should be remembered as a prophet of our age - Staff Pick by Henry

Bringing together more than 350 texts written between 1953 and 2016, this comprehensive volume establishes artist and activist Gustav Metzger (1926–2017) as a towering figure of the 20th century, a long-overdue recognition of the artist’s influential vision.

Renowned for his use of unstable materials and chemical reactions to create artworks that embody processes of change, destruction, and renewal, Metzger was also a prolific writer, theoretician, and satirist.

Edited by Gustav’s long-time friend and curator Mathieu Copeland, this anthology of writings makes Metzger’s key thinking from the 1950s onward available to a wide audience.

It includes seminal writings such as his manifestos of auto-destructive and auto-creative art (both 1961), ‘On Random Activity in Material/Transforming Works of Art’ (1964), ‘The Possibility of Auto-Destructive Architecture’ (1966), his inspiring interview with R. Buckminster Fuller from 1970, ‘The Artist in the Face of Social Collapse’ (1998), and his legacy manifesto entitled ‘Remember Nature’ from 2013, as well as art criticism, political satires, and lecture transcriptions.

His writing allows a challenging reading of the contemporary (art) period as analysed by one of its most discerning figures—a pioneering artist and thinker involved in environmental and societal issues very early on.