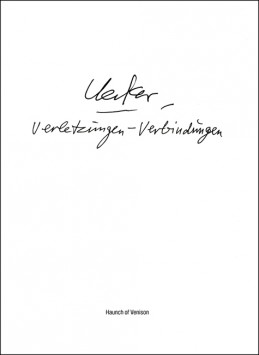 This catalogue accompanies the first New York exhibition of new work by Günther Uecker since 1966. One of Germany’s most influential living artists, he created over 15 new works for this show at Haunch of Venison, New York.

Together with other members of the avant-garde group ZERO, he was at the forefront of the international movement to rejuvenate art in the late 1950s. United by the commonality of purpose that was signing off on the past and starting again at zero, the group stood at the centre of the European wide post-war art movement.

Uecker’s wide-ranging oeuvre includes paintings, object art, installations as well as stage designs and films. Known for his paintings that double as beds of nails, his jagged works of art followed his years of experimentation with painted panels.

Published on the occasion of the exhibition Günther Uecker: Violations – Connections at Haunch of Venison, New York, 9 November – 21 December 2012.