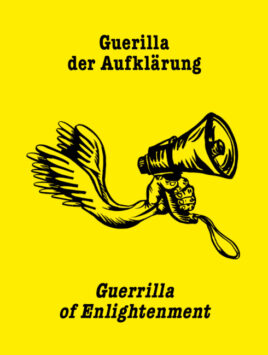 Over the years, there has always been evidence of artistic practice proving that artists raise their voices loudly and with powerful images.

Many of the around 50 artistic contributions draw attention to counter strategies and communicate values such as solidarity, co-determination, justice and diversity.

The exhibition series documented in this volume was based on the conviction that artistic creation is capable of contributing to positive changes in society.

Artists who are addressed in this way use their means to analyse political and social processes, to draw attention to little-noticed issues, to protest against undesirable developments, but also to present oppositional views and to promote liberal-democratic to domination-free thinking and acting.

Published after the four-part series of exhibitions which took place at the Centre for Contemporary Art, Graz, Austria (June 2018 – September 2019).