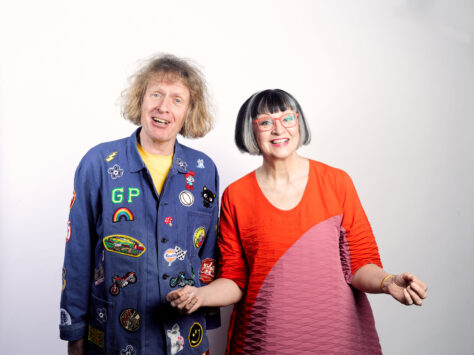 During lockdown, Grayson Perry, one of Britain’s foremost artists, brought the nation together through art, helping them to unleash their creativity as part of his Channel 4 TV series. Every week he hosted the show from his own studio taking the country with him as he created his own new artworks. Grayson and his wife Philippa talked to other famous artists about how they were spending their time in isolation and invited them to make their own works in response to this unprecedented crisis.

Due to the popularity of the programme, it continued into a third series, in 2022 with a range of new themes for the artists and special guests to explore – Love, Heroes & Heroines, Normal Life, Inside My Head, Holidays, Future, and The Queen.

A central element of the programmes has been Grayson’s keen interest to encourage members of the public to send him their artworks which they had been making at home, talking to them via video calls and choosing his favourite artworks. Over time there have been thousands of entries, an overwhelming response to his call out. The variety of entries using canvas, paper, photography, sculpture and mixed media demonstrates the enormous imagination, skill and creativity of the nation. These works, alongside those of Grayson Perry, Philippa Perry and the invited artists and celebrities, are collected here to catalogue the exhibition at Midlands Art Centre, Birmingham.

£12.00
Coming soon
(subscribe to our newsletter be the first to know when this title is available)