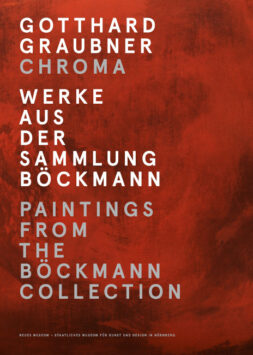 Gotthard Graubner (1930–2013) was a painter who celebrated the pure colour, freed from all object references and gave to it a physical presence in pillow-like image carriers.

The Neues Museum Nürnberg has an impressive inventory of his works spanning four decades, including many ‘colour space bodies’. This allows the development of the work to be traced in all important stages.

The majority of the paintings come from the Böckmann Collection, which from the beginning entrusted the museum with permanent loans from Gotthard Graubner, Gerhard Richter and A.R. Penck.

In 2016, the New Museum in Nuremberg dedicated an exhibition to Gotthard Graubner entitled ‘Chroma’, which turned into a festival of colour in the wide, light-flooded exhibition hall.

This catalogue documents the show and presents all 24 Graubner works from the Böckmann Collection in full-page images.

Jürgen Schilling, the former director of Villa Massimo in Rome, was won as an author. He introduces Graubner as an artist who defies all common classifications and, with his ‘colour space body’, created a tailor-made instrument for his chromatic expeditions.

Published after the exhibition at Neues Museum Nürnberg, 15 July – 3 October 2016.