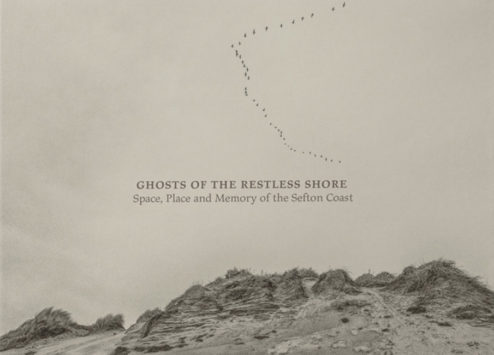 Four of the artists (Jake Campbell, Mike Collier, Tim Collier, and Rob Strachan) walked the Sefton Coastal Footpath together in the company of local natural historian, John Dempsey, from the Sefton Coast Landscape Partnership, in the summer of 2014. The work in the exhibition (and this book – which also includes the artist Sam Wiehl) is based around the experiences of that walk, as well as a sustained period of research in 2014/15.

The Sefton coast is highly valued for its intrinsic beauty and biodiversity, some of which is rare by European and UK standards (the area has classified National Nature Reserve, and Sites of Special Scientific Interest). It is alive with wildlife in its dunes, pinewoods and heaths, and its tidal waters are home to famous shipwrecks such as the ‘Star of Hope’.

Ghosts of the Restless Shore is the result of a collaborative project, organised by WALK (University of Sunderland’s Walking, Art, Landskip and Knowledge research group) which began life as a series of walks (and then developed into a ‘walking symposium’) along the Sefton Coastal Footpath in 2014. The walks were advertised locally and members of the public were invited to join the artists and share their own experiences.

Published retrospectively after the project in 2014/15, and the exhibition at The Atkinson Gallery, Southport, 22 August – 15 November 2015.