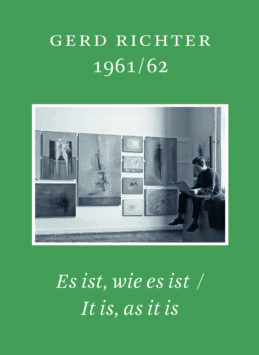 Gerhard Richter’s early period in Dresden ended in February 1961 with his escape from the DDR. The artist’s work in the West officially began at the end of 1962 with the painting listed number one in his works catalogue, “Tisch”.

The interval of one and a half years in between has remained largely ignored by art historians. It was during these months that Gerhard Richter, who still called himself “Gerd” at the time, tried to find his feet in his new surroundings in Düsseldorf.

The book presents numerous letters, photographs and documents, as well as pictures from this period and chronicles Richter’s experiences and search for a new artistic beginning.

£30.00
Coming soon
(subscribe to our newsletter be the first to know when this title is available)