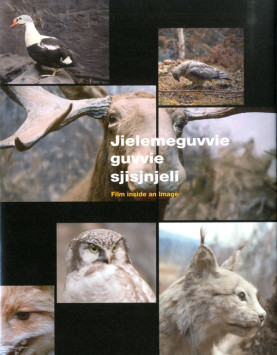 Renowned for his film installations which re-enact conversations from specific historic moments, Irish artist Gerard Byrne works with photography, video and live art to explore the way we understand the present, through revisiting the past.

This book centres on the world-premiere of a new film by the artist made at the Biologiska Museet in Stockholm: the first natural history museum to use  a large-scale diorama.

The 19th century diorama is a form of representation that anticipates the invention of both photography and cinema. Gerard Byrne explores this immersive representation of a Nordic wilderness as an image that is fixed both in the time of its making and of the present. His film stages a confrontation between the photographic image and the forms of representation that it supplanted and raises questions as to what comes next.

The new work is titled Jielemeguvvie guvvie sjisjnjeli – Film inside an image from the disappearing Nordic language of Southern Sami – that of the native peoples depicted in the museum diorama. Jielemeguvvie guvvie sjisjnjeli is the closest translation available in Southern Sami of ‘film inside an image’. Based on arctic nature and the nomadic life, no equivalent word apparently exists for ‘film’ in this ancient language. Here therefore we have, approximately, ‘Life within an image’.

Published on the occasion of the exhibition Gerard Byrne: 1/125 of a Second at Mead Gallery, Warwick, 16 January  – 12 March 2016. The exhibition tours to Monash University Museum of Art, Melbourne (October 2016), and to Moderna Museet, Stockholm (February 2017).