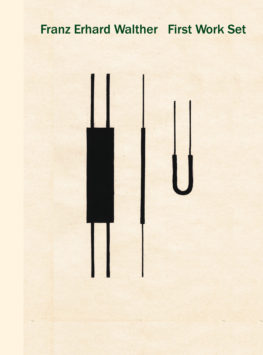 Comprising 58 fabric elements – what the artist has termed  ‘instruments for process’ – this multi-part sculpture, began in 1963 in Düsseldorf and was completed in 1969 in New York City, is Walther’s most ambitious work.

This publication retraces Walther’s use of malleable materials and ephemeral ‘actions’ as the basis for his sculptures, his understanding of the role of language, and the presence of drawing as integral to his conception of space. As with Walther’s similar works, First Work Set’s individual fabric elements are activated by visitors in a series of quotidian actions such as folding,  dropping, leaning and measuring, that often entail cooperation among a couple or a group.

For decades, museum exhibitions of this work have placed folded archival versions of the fabric elements in vitrines, preventing viewers from receiving the direct, performative encounter originally intended by the artist.

For this exhibition at Dia:Beacon, Dia worked collaboratively with Walther to select a number of the original fabric elements available to be directly handled and performed by visitors. During the exhibition, Dia held an event inviting leading scholars to take advantage of the opportunity to experience the work firsthand in this way, and to present new thinking on his oeuvre.

This book is a unique project grown out of the inclusion of this major work in Dia’s collection in the exhibition Franz Erhard Walther: Work as Action,  presented at Dia:Beacon, New York, 2 October 2010 – 15 February 2012.