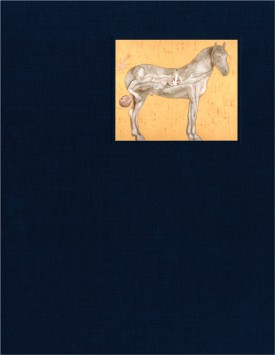 Mandala for Crusoe, explores Clemente’s newest body of work from 2012.

This recent series brings together 14 paintings which fuse a myriad of cultural references from the classical, mythological and Eastern visual traditions.

Since the 1970s, Clemente has divided his time between New York and Varanasi in India, feeling a nomadic affinity with the contemplative visual tradition of both the East and West; while the roots of his painterly vision are in the frescoes of the Italian Renaissance, historical Indian imagery and the Romanticism of William Blake are equally pervasive.

An introduction by Blain|Southern’s Chief Curator and Director of Exhibitions, Mario Codognato, and an essay by Sir Norman Rosenthal titled, Crusoe Meets Clemente accompany the beautiful colour images in this catalogue.

Published on the occasion of the exhibition Francesco Clemente: Mandala for Crusoe at Blain|Southern, London, 30 November 2012 – 26 January 2013.