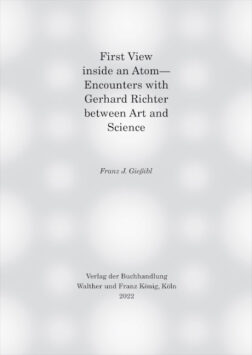 In July 2000, an article appeared in the daily newspaper Frankfurter Allgemeine Zeitung with the title: ‘First look inside an atom’ with a blurry illustration of the electron clouds of an atom. The article fascinated the painter Gerhard Richter so much that he used it as a template for the edition ‘Erster Blick (2000)’.

Richter was also interested in how physicists image such small objects, and this led to contact between him and Franz J. Gießibl, the inventor of the ‘eye’ for the atomic force microscope used in the imaging process.

The contact between Richter and Gießibl has remained alive to this day due to common interests, and this book chronicles their friendly cooperation over the past two decades.

Gerhard Richter writes of the book, ‘I couldn’t put it down and read it all the way through, not thoroughly yet, but in such a way that I am very taken with it because it is really very good in every respect!’

Gerd Binnig, pioneer of nanotechnology and Nobel Prize winner in physics says, ‘It reads very nicely and excitingly. Moreover, the little book has a very special component: the author connects very different fields and domains such as science, art and business so naturally and seamlessly. As if it were a world without rifts. That’s beautiful.’

Franz J. Gießibl, born in 1962 is a physicist. In 1996 he invented a sensor for the atomic force microscope that makes the structure of electron clouds in the atom visible. He has been the Chair of Quantum Nanophysics at the University of Regensburg since 2006.

This is the English Edition of this title.