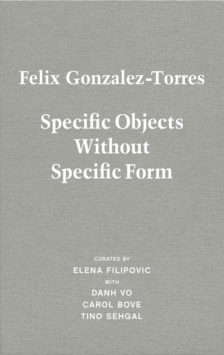 Felix Gonzalez-Torres (1957-1996) is one of the most influential artists of his generation. This catalogue includes both rarely seen and more known paintings, sculptures, photographic works, and public projects, reflecting the full scope of the artist’s short yet prolific career.

Specific Objects Without Specific Form offered several exhibition versions (and none the authoritative one), all the better to present the oeuvre of an artist who put fragility, the passage of time, and the questioning of authority at the centre of his artwork.

At each venue in which the show was hosted, the exhibition was co-curated with, and re-installed/re-imagined by a different invited artist whose practice has been informed by Gonzalez-Torres’ work. Those artists are Danh Vo, Carol Bove, and Tino Sehgal.

Specific Objects without Specific Form acknowledges that the way an exhibition begins and ends its ‘story’, the emphasis it places on one aspect more than another, the way it presents individual artworks, the juxtapositions it constructs, the mood it creates, in addition to the way an exhibition is discursively presented — all of these potentially shift the way that a body of work might be understood by its public. And all of these participate in the construction of the meaning and reception of an oeuvre, which is to say, nothing less than the construction of history.