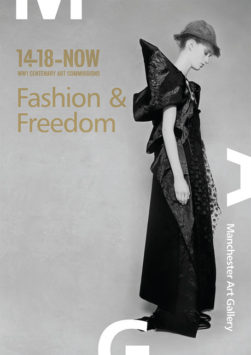 The onset of war in 1914 changed British society. As men left to fight in Europe, over a million women went to work for the first time. New responsibility gave women new freedom and led to new ways of dressing, as silhouettes and social codes changed.

Also included are works by the next generation of fashion talent – all influenced by the new fashions and freedoms worn and won by women in 1914-18. Costume from Manchester Art Gallery’s collection of pre- and post-war fashions complements the exhibition.

This publication includes stunning images of the new fashion designs, historic costume, sketches and stills from the films alongside contextual essays and text about each new commission.

‘Fashion is often dismissed as a frivolous thing, but it is interwoven into our social and political history’ — Caroline Rush (CBE, CEO British Fashion Council)

Fashion & Freedom is a co-commissioned by 14-18 NOW: WW1 Centenary Art Commissions – an ambitious, multi-faceted exhibition that examines the fashion legacy of the First World War for the 21st century.

Published on the occasion of the exhibition, Fashion & Freedom at Manchester Art Gallery, 13 May – 27 November 2016.