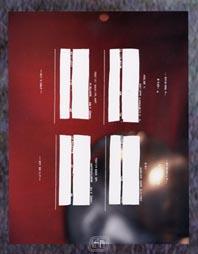 Eyes Only is a series of photographic ‘reconstructions’ based around contemporary and classic descriptions, experiences and symbols of UFO occurrences and sightings. It uses an innovative mixture of photographs, video stills, text and graphics to create a ‘visual narrative’ that alludes to science fiction, ‘official’ and unofficial UFO reports and records, mysteries, cover-ups and conspiracy theories.

This superbly produced book uses first hand witness reports of ‘other world’ confrontations and draws upon descriptions of abduction experiences, abstract imagery, lack of details and the sense of foreboding and strangeness that appears to precede most UFO encounters. Eyes Only explores aspects of this phenomenon and the complex interplay between collective consciousness and personal perception that informs the processes of interpretation and meaning. Christopher Ashworth of design company Still (and formerly art director of Raygun magazine) has responded to official documentation of UFO experiences by creating a new font that has then been typeset using the idiosyncratic typographic layout and blank censored sections of the original papers.

Includes an interactive CD. An internet project produced by John Holden and authored by new media production company Lessrain is available at  www.lessrain.com/eyesonly