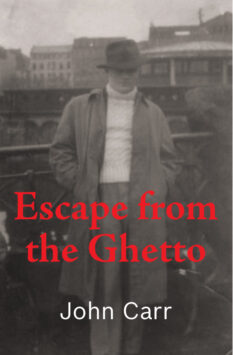 Early in 1940 a thirteen-year-old Jewish boy and his eleven-year-old brother began to make their way through the barbed wire that surrounded the Lodz ghetto on their way to steal food for their family.

The younger brother got caught on the wire. The older killed the guard who came to shoot him. Thus began an Odyssey across Europe, first to the frozen river on the Russian border, where Soviet troops rolled hand grenades over the ice, then hidden in a German troop train to Berlin.

From Berlin to Alsace and a beautiful Roma girl, also fleeing the Nazis. Across the border into Vichy France concealed in a German jeep and over the Pyrenees, only to be arrested by Spanish police.

Saved by a British diplomat and finding his way to Gibraltar Chaim Herszman, now Henry Karbowski and soon to be Henry Carr, returned to Germany in the British Army.

This extraordinary but true tale of a boy’s escape from the ghetto and the prospect of extermination in the camps, and of his journey to adulthood as he made his way across Europe, is almost unbearably exciting while being at the same time, as all true stories are, complex and bitter-sweet.

£12.50
Buy now
(Your order will be fulfilled by NBN International)