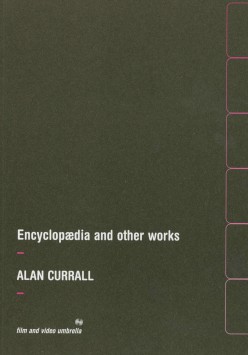 This abridged A-Z of Alan Currall’s artistic practice looks back over a body of disarmingly homegrown video works that culminates in what (for Currall) is the magnum opus of Encyclopaedia, a prophetic parody of a kind of user-generated wiki-almanac, with entries (on a dazzlingly diverse range of subjects) from the artist’s immediate circle of family and friends.

Adding to this repository of human knowledge are two essays by art critics Claire Doherty and Sean Cubitt, interspersed with fragments of Currall’s video work.  The publication is completed by a CD-Rom of Encylopaedia itself.

Please note that this CD-Rom is incompatible with current computer operating systems. The disc will work in Mac OS9.2 or PC Windows 95, but not in later systems

The Encyclopaedia CD-Rom was supported by the New Media Projects Fund of the Arts Council of England. Encyclopaedia was made possible with the support of the 1998 Richard Hough Bursary.