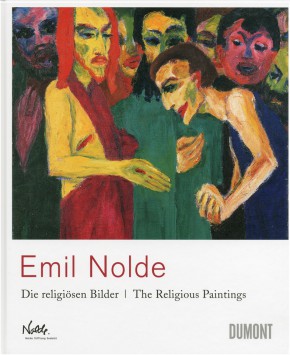 Emil Nolde himself considered his ‘biblical and legend pictures’ to be the zenith of his artistic production. He numbered about 50 paintings to this canon in a handwritten note but many more can be allocated to it.

‘The vision of the Child of yore came alive again while I sat, deeply moved, reading the Bible during long winter evenings. They were pictures which I read, richest oriental fantasy. They incessantly whirled up before my mind’s eye until later, much later, the now adult man and artist painted and painted them in a dreamlike inspiration.’

This new volume from the large Nolde series is a compendium on the painter’s ‘biblical and legend pictures’ with new contributions and a comprehensive overview on this complex of works.

Aside from Manfred Reuther’s essay on Nolde’s religiosity and the connection between the biblically-themed paintings and his Fantasies and figural pictures, Christian Ring examines the reception history of the ‘biblical and legend pictures’ until about 1937.

Published alongside the exhibition at the Nolde Foundation Seebüll at the Berlin Branch, 11 November 2011 – 15 April 2012.