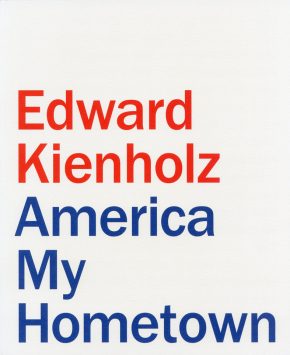 America My Hometown traces Edward Kienholz’s formative years (1954 – 1967), showing an artist coming to terms with both his unique vision and the social climate of the US throughout this tumultuous era. The work is direct and raw in its execution, as well as unsparingly critical of the political problems of twentieth-century America.

Producing work over a period of extreme political tension, social anxiety and rising global capitalism, Kienholz created a body of work that, in the words of Guy Brett, reviewing his 1971 exhibition at London’s ICA, were ‘a protest against a dehumanized, fear-ridden society’.

This can be seen throughout this survey of his earliest works, and perhaps best exemplified in The Nativity (1961), an assemblage that reinterprets this biblical story through the castaway materials and everyday icons of his adopted hometown of Los Angeles.

This publication accompanies an exhibition of the same name at Blain|Southern, London  (18 May – 14 July 2018) and features texts by art historian David Anfam and artist Jake Chapman, as well as a foreword by Craig Burnett, colour plates and archive photography.